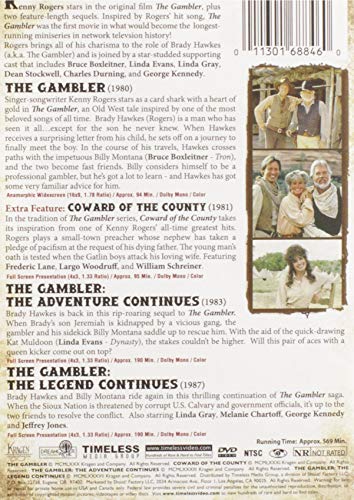 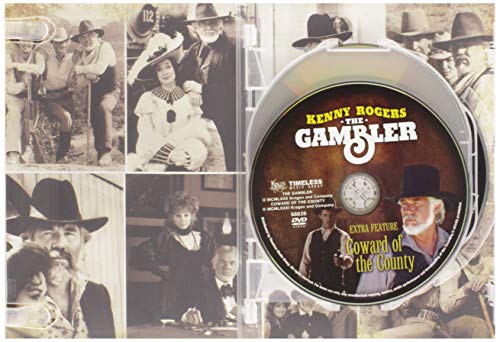 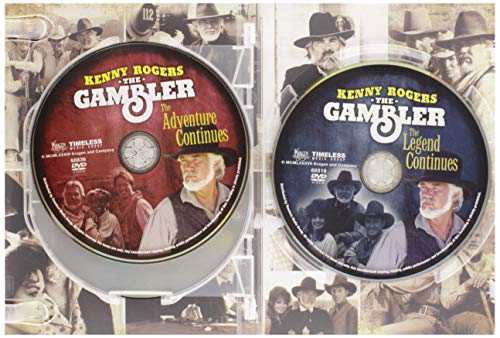 Kenny Rogers as The Gambler (1980)
"You got to know when to hold em, know when to fold em…"
Singer-songwriter Kenny Rogers stars as a card shark with a heart of gold in The Gambler, an Old West tale inspired by one of the most beloved songs of all time.
Brady Hawkes (Rogers) is a man who has seen it all…except for the son he never knew. When Hawkes receives a surprising letter from his child, he sets off on a journey to finally meet the boy. In the course of his travels, Hawkes crosses paths with the impetuous Billy Montana (Bruce Boxleitner, Tron), and the two become fast friends. Billy considers himself to be a professional gambler, but he’s got a lot to learn and Hawkes has got some very familiar advice for him.
Featuring Clu Gulager, Christine Belford, and Lee Purcell, The Gambler is a charming Western with heart. Take a seat and enjoy yourself you can always bet on Kenny Rogers to entertain.Extra Feature:Coward of the County (1981)

In the tradition of the Gambler series, Coward of the County takes its inspiration from one of Kenny Rogers all-time greatest hits. Rogers plays a small-town preacher whose nephew has taken a pledge of pacifism at the request of his dying father. The young man’s oath is tested when the Gatlin boys attack his loving wife. Featuring Frederic Lane, Largo Woodruff, and William Schreiner.Disc Two:Kenny Rogers as The Gambler: The Adventure Continues (1983)
Brady Hawkes is back in this rip-roaring sequel to The Gambler. When Brady’s son Jeremiah is kidnapped by a vicious gang, the gambler and his sidekick Billy Montana saddle up to rescue him. With the aid of the quick-drawing Kat Muldoon (Linda Evans, Dynasty), the stakes couldn’t be higher. Will this pair of aces with a queen kicker come out on top?Disc Three:Kenny Rogers as The Gambler, Part III: The Legend Continues (1987)
Brady Hawkes and Billy Montana ride again in this thrilling continuation of The Gambler saga. When the Sioux Nation is threatened by corrupt U.S. Calvary and government officials, it’s up to the two friends to resolve the conflict. Also starring Linda Gray, Melanie Chartoff, George Kennedy, and Jeffrey Jones.
Is Discontinued By Manufacturer ‏ : ‎ No
MPAA rating ‏ : ‎ NR (Not Rated)
Product Dimensions ‏ : ‎ 0.7 x 7.5 x 5.4 inches; 3.2 Ounces
Media Format ‏ : ‎ Multiple Formats, NTSC, Widescreen, Dolby
Run time ‏ : ‎ 9 hours and 29 minutes
Release date ‏ : ‎ February 4, 2014
Actors ‏ : ‎ Kenny Rogers, Bruce Boxleitner, Clu Gulager, Linda Evans
Studio ‏ : ‎ Timeless Media
ASIN ‏ : ‎ B00GM5U80Y
Country of Origin ‏ : ‎ USA
Number of discs ‏ : ‎ 2

The Sons of Katie Elder

The Man Who Shot Liberty Valance