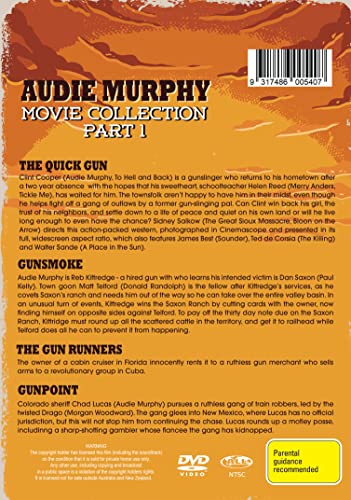 “On his way home after two years away, a man known for being fast with a gun is caught by a gang who are heading to the same town and planning on robbing the bank. He escapes and tries to warn the townsmen of the impending danger. Hired gun Reb Kittridge (Audie Murphy) goes to work in Montana for Matt Telford (Donald Randolph), who is looking to take over Dan Saxon’s (Paul Kelly) fertile cattle land. What Reb doesn’t bargain for is becoming a landowner himself after winning Saxon’s property in a card game. Suddenly, he must work with Saxon and daughter Rita (Susan Cabot) to run the cattle to a rail line in order to make a mortgage payment. To stop him, Telford hires Reb’s former partner, Johnny Lake (Charles Drake). Sam Martin (Audie Murphy) owns a charter boat in the Florida Keys. He also has a serious gambling problem and mounting debts. His wife, Lucy (Patricia Owens), and first mate, Harvey (Everett Sloane), have managed to keep him out of serious trouble. However, when Sam suddenly finds himself on the brink of bankruptcy, he resorts to helping crooked weapons dealer Hanagan (Eddie Albert) smuggle guns into Cuba. But things get ugly for Sam when the scheme expands to include murder. Near the Wild West town of Lodgepole, Colo., Sheriff Chad Lucas (Audie Murphy) gets shot during a train robbery — not by the robbers, but by his jealous deputy, Cap. Hold (Denver Pyle), who believes he should be sheriff. Left to die, Chad rallies and goes off in search of the train robbers. Tracking them down in New Mexico, Chad and saloon owner Nate (Warren Stevens) chase after gang leader Drago (Morgan Woodward), who has taken Chad’s ex-lover Uvalde (Joan Staley) as a hostage.”
MPAA rating ‏ : ‎ NR (Not Rated)
Package Dimensions ‏ : ‎ 7.6 x 5.31 x 0.59 inches; 4.97 Ounces
Director ‏ : ‎ Sidney Salkow, Nathan Juran, Don Siegel, Earl Bellamy
Run time ‏ : ‎ 360 minutes
Actors ‏ : ‎ Audie Murphy, James Best, Susan Cabot, Eddie Albert, Joan Staley
ASIN ‏ : ‎ B09XFJVZCJ
Number of discs ‏ : ‎ 4

The Sons of Katie Elder