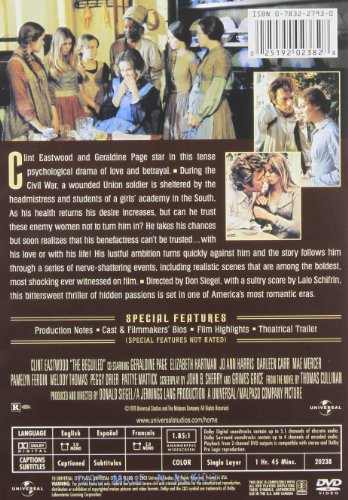 Clint Eastwood and Geraldine Page star in this tense psychological drama of love and betrayal. During the Civil War a wounded Union soldier is sheltered by the headmistress and students of a girls’ academy in the South. As his health returns his desire increases, but can he trust these enemy women not to turn him in? He takes his chances but soon realizes that his benefactress can’t be trusted…with his love or with his life! His lustful ambition turns quickly against him and the story follows him through a series of nerve-shattering events, including realistic scenes that are among the boldest, most shocking ever witnessed on film. Directed by Don Siegel, with a sultry score by Lalo Schifrin, this bittersweet thriller of hidden passions is set in one of America’s romantic eras.

Be the first to review “The Beguiled (1971)” Cancel reply