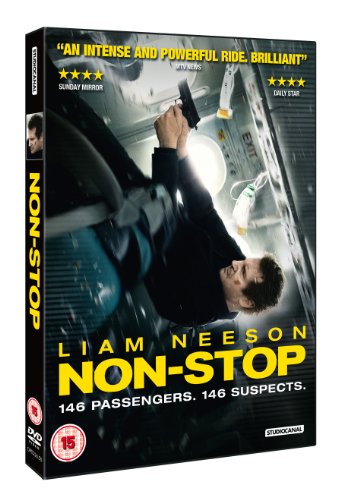 Liam Neeson, Julianne Moore and Michelle Dockery star in this action drama set on board an aeroplane from director Jaume Collet-Serra. While flying from New York to London US Federal Air Marshal Bill Marks (Neeson) receives text messages from an anonymous sender who is threatening to murder a passenger every 20 minutes until millions of dollars are deposited into an unnamed bank account. Marks faces a race against time to find and restrain the person responsible but when the bank account is found out to be in his name he is accused of being the hijacker. As victims are claimed, Marks discovers a bomb on board the aircraft which only exacerbates his predicament. Can he find the culprit in order to save the remaining passengers and prove his innocence?
Aspect Ratio ‏ : ‎ 2.40:1
Is Discontinued By Manufacturer ‏ : ‎ No
Package Dimensions ‏ : ‎ 7.56 x 5.51 x 0.59 inches; 2.82 Ounces
Media Format ‏ : ‎ PAL
Run time ‏ : ‎ 1 hour and 46 minutes
Release date ‏ : ‎ June 30, 2014
Studio ‏ : ‎ Studiocanal
ASIN ‏ : ‎ B00IIK6C9M
Number of discs ‏ : ‎ 1

Be the first to review “Non-Stop 2014” Cancel reply

Eye in the Sky

Added to wishlistRemoved from wishlist 0
$19.99