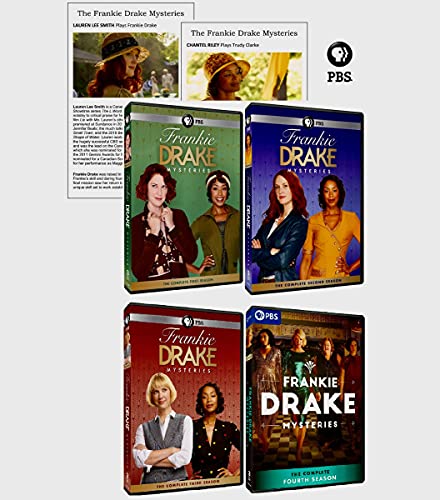 This Collection includes your COMPLIMENTARY CAST GUIDE plus COMPLETE SEASONS 1, 2, 3 & 4 of THE FRANKIE DRAKE MYSTERIES! Set in 1920’s Toronto with the world undergoing massive changes, a new age calls for a new kind of investigator and the women of Drake Private Detectives fit the bill. Jazz is on the turntables as communism and prohibition are being hotly debated over hard drinks in speakeasies. Society will never be the same – and crime has never had it better. The Drake Private Detectives take on cases that explore every cross-section of Toronto, from gospel church choirs, bathing beauties, and the early cinema scene, to the homes and private parties of the city’s elite. Frankie and Trudy’s fearless sense of adventure gets them into all kinds of trouble, but they always manage to find a way out. They are new detectives for a new world – but is the world ready for them? As seen on public television. 41 episodes. More than 35 hours in widescreen stereo on a total of 12 DVDs. Subtitled in English (SDH).
MPAA rating ‏ : ‎ NR (Not Rated)
Package Dimensions ‏ : ‎ 7.56 x 5.47 x 2.28 inches; 1.04 Pounds
Media Format ‏ : ‎ NTSC, Color, Widescreen
Run time ‏ : ‎ 2120 minutes
Actors ‏ : ‎ Chantel Riley, Lauren Lee Smith, Sharron Matthews, Rebecca Liddiard
ASIN ‏ : ‎ B09FCN6GLN
Number of discs ‏ : ‎ 12