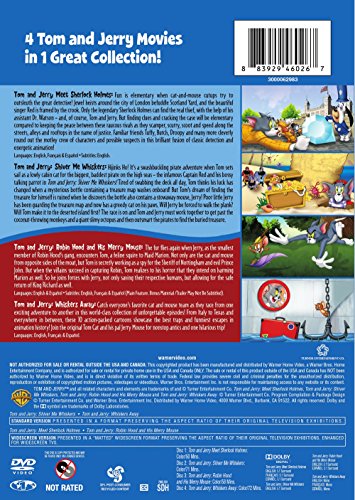 4 Kid Favorites: Tom and Jerry (DVD)
Tom and Jerry: Whiskers Away Catch everyone’s favorite cat and mouse team as they race from one exciting adventure to another in this world-class collection of unforgettable episodes! From Italy to Texas and everywhere in between, these 10 action-packed cartoons showcase the best traps and funniest escapes in animation history! Join the original Tom Cat and his pal Jerry Mouse for non-stop antics and one hilarious trip! Tom and Jerry: Shiver Me Whiskers! Hijinks Ho! It’s a swashbuckling pirate adventure when Tom sets sail as a lowly cabin cat for the baddest pirate on the high seas – the infamous Captain Red and his bossy talking parrot in Tom and Jerry: Shiver Me Whiskers! Tired of swabbing the deck all day, Tom thinks his luck has changed when a mysterious bottle containing a treasure map washes onboard! But Tom’s dream of finding the treasure for himself is ruined when he discovers the bottle also contains a stowaway mouse, Jerry! Poor little Jerry has been Tom and Jerry Meet Sherlock Holmes guarding the treasure map and now has a greedy cat on his paws. Will Jerry be forced to walk the plank? Will Tom make it to the deserted island first? The race is on and Tom and Jerry must work together to get past the coconut-throwing monkeys and a giant slimy octopus and then outsmart the pirates to find the buried treasure. Tom and Jerry Robin Hood and His Merry Mouse The fur flies again, when Jerry, as the smallest member of Robin Hood’s gang, encounters Tom, a feline squire to Maid Marion. Not only are the cat and mouse from opposite sides of the moat, but Tom is secretly working as a spy for the Sheriff of Nottingham and evil Prince John. But when the villains succeed in capturing Robin, Tom realizes to his horror that they intend on harming Marion as well. So he joins forces with Jerry, not only saving their respective humans, but allowing for the safe return of King Richard as well. Fun is elementary when cat-and-mouse cutups try to outsleuth the great detective! Jewel heists around the city of London befuddle Scotland Yard and the beautiful singer Red is framed by the crook. Only the legendary Sherlock Holmes can find the real thief, with the help of his assistant Dr. Watson – and , of course, Tom and Jerry. But finding clues and cracking the case will be elementary compared to keeping the peace between these raucous rivals as they scamper, scurry, scoot and speed along the streets, alleys and rooftops in the name of justice. Familiar friends Tuffy, Butch, Droopy and many more cleverly round out the motley crew of characters and possible suspects in this brilliant fusion of classic detection and energetic animation.]]>
Product Dimensions ‏ : ‎ 0.7 x 7.5 x 5.4 inches; 9.92 Ounces
Item model number ‏ : ‎ 1000543946
Director ‏ : ‎ Various
Media Format ‏ : ‎ Multiple Formats, Box set, NTSC
Run time ‏ : ‎ 8 hours and 8 minutes
Release date ‏ : ‎ June 23, 2015
Actors ‏ : ‎ Various
Studio ‏ : ‎ WarnerBrothers
ASIN ‏ : ‎ B00WUI3KHA
Country of Origin ‏ : ‎ USA
Number of discs ‏ : ‎ 4

Be the first to review “4 Kid Favorites: Tom and Jerry (DVD)” Cancel reply

Where the Garbage Goes