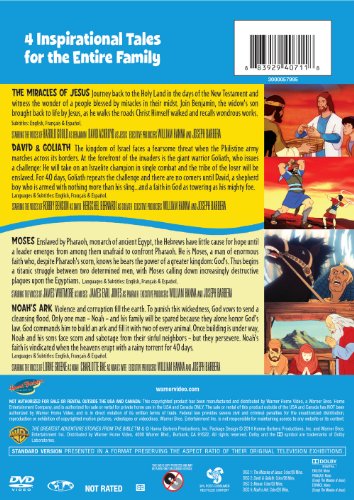 Jesus’ miracles are the formidable warrior Goliath. This gigantic man proposes a duel, with the loser’s tribe being forced into servitude. The challenger is an Israelite champion. Goliath keeps issuing the challenge, but no one accepts it for 40 days. One young man, David, a shepherd, steps forward, equipped only with a sling and a trust in God as great as his adversary. Moses Once the Hebrews are enslaved by the ancient Egyptian pharaoh Pharaoh, they have little to hope for until a courageous leader develops among them. Moses is a man of immense faith who, despite Pharoah’s contempt, is confident in the authority he represents: God’s kingdom. It’s the beginning of a tremendous war between two strong men, with Moses unleashing a series of more devastating plagues on the Egyptians. In the exciting conclusion, Moses and his people are cornered between an enraged army and the depths of the sea. Take a trip back in time to the land of the New Testament and see for yourself the miracle-working folks who called their ark home. Corruption and violence have spread over the globe. God has sworn that He will bring a devastating flood as a punishment for this evil. Noah is the only man and his family to follow God’s commandment, thus they will be saved. God tells him to construct an ark and load it with duplicates of every species of animals. Once construction begins, however, Noah and his sons are met with ridicule and sabotage by their wicked neighbors. When the skies open up and dump a deluge of rain for 40 days, Noah’s faith is proven correct. Although God has already begun testing Noah’s bravery and dedication, the test is far from over. midst. Benjamin, the son of the widow who Jesus raised from the dead, invites you to accompany him as he travels the paths Jesus trod and recounts the miracles He performed. All the miracles—from the wedding at Cana, where water was turned into wine, to the healing of the centurion’s servant, to the stilling of the tempest, to the feeding of the multitudes, to Jesus’s walking on the water—unfold spectacularly in this respectful, inspirational animated dramatization. Stories of David and Goliath When the Philistine army invades, it poses a serious danger to the Israelite kingdom. Ahead of the invading forces

Be the first to review “4 Family Favorites: Greatest Adventures of the Bible” Cancel reply

Christmas for a Dollar

Faith and Science with Dr. Fizzlebop: 52 Fizztastically Fun Experiments and Devotions for Families

Dreamer: Inspired by a True Story

Added to wishlistRemoved from wishlist 0
$5.99