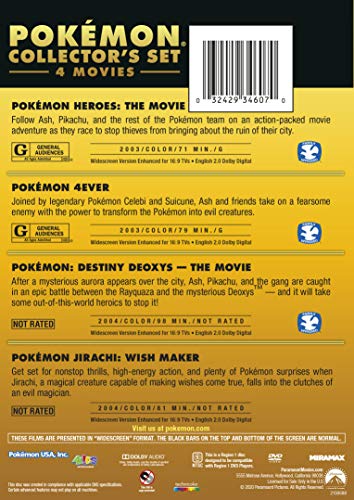 POKEMON IV: 4EVER: This fourth big-screen occasion film, starring the hit collectible characters, introduces Celebi, a inexperienced, winged Pokémon with the power to journey by time. After Celebi is captured, it is as much as Ash, Sam, and Pikachu to save lots of the destiny of the complete forest. POKEMON V: HEROES: The fifth installment of the phenomenally profitable POKÉMON franchise takes place in a mysterious metropolis on water. Set in opposition to a baffling maze of canals and alleyways, Ash, Pikachu, the remainder of the gang tackle a slick new pair of thieves on this glamorous, high-stakes journey story. Two new Pokemon characters – Latias and Latios, who possess sturdy psychic skills and the ability to disguise themselves as people, make their debut. POKEMON VI: JIRACHI WISH MAKER: Solely as soon as each thousand years when the Millennium Comet is seen within the night time sky does Jirachi awaken from his slumber. Upon awakening at a touring circus alongside new mates, Ash, Pikachu, and Max, this new Pokémon is captured by an evil magician and former scientist who want to harness Jirachi’s unimaginable power. In the event that they succeed, they will carry to life one of the crucial legendary and highly effective Pokémon of all. POKEMON VII: DESTINY DEOXYS: Ash and Pikachu, big-time heroes of the Pokémon franchise, journey to the futuristic metropolis of Larousse the place they meet Tory, who eschews all Pokémon and their masters. However Tory should overcome his dread when the town is invaded by the Pokémon Deoxys.
MPAA score ‏ : ‎ G (Basic Viewers)
Product Dimensions ‏ : ‎ 0.7 x 7.5 x 5.4 inches; 1.45 Ounces
Merchandise mannequin quantity ‏ : ‎ D59512780D
Director ‏ : ‎ Numerous
Media Format ‏ : ‎ NTSC, Widescreen
Run time ‏ : ‎ 5 hours and half-hour
Launch date ‏ : ‎ September 22, 2020
Actors ‏ : ‎ Veronica Taylor
Studio ‏ : ‎ Miramax
ASIN ‏ : ‎ B08F6X4Q2B
Nation of Origin ‏ : ‎ USA
Variety of discs ‏ : ‎ 1

Be the first to review “Pokémon 4 Movie Collection” Cancel reply

One Piece – Collection One

Flowers In The Attic [DVD]

Added to wishlistRemoved from wishlist 0
$44.95