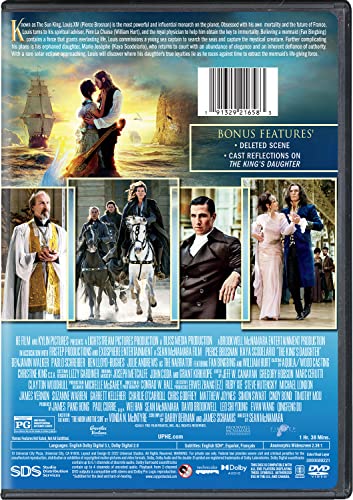 Louis XIV (Pierce Brosnan), sometimes known as “The Sun King,” is the most powerful and influential ruler in the world. Louis consults his priest, Père La Chaise (William Hurt), and the king’s physician as he becomes preoccupied with his own demise and the fate of France. Louis hires a young captain to explore the oceans in pursuit of a mermaid (Fan Bingbing) because he believes the mermaid possesses a power that offers eternal life. His plans are further complicated when his orphaned daughter, Marie-Josèphe (Kaya Scodelario), comes to court with a flair for the dramatic and an innate disdain of authority. Louis must race against time to drain the mermaid of her life-giving energy before a rare solar eclipse, during which he will learn his daughter’s real allegiance.
Unexpected Material:

Reflections on The King’s Daughter from the Cast, Cut From the Final Cut

Be the first to review “The King’s Daughter” Cancel reply

The Fast and the Furious

Added to wishlistRemoved from wishlist 0
$11.85