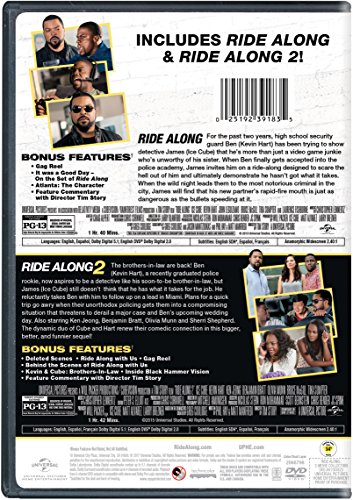 Ride Along: For the past two years, high school security guard Ben (Kevin Hart) has been trying to show detective James (Ice Cube) that he’s more than just a video game junkie who’s unworthy of his sister. When Ben finally gets accepted into the police academy, James invites him on a ride-along designed to scare the hell out of him and ultimately demonstrate he hasn’t got what it takes. When the wild night leads them to the most notorious criminal in the city, James will find that his new partner’s rapid-fire mouth is just as dangerous as the bullets speeding at it. Ride Along 2: The brothers-in-law are back! Ben (Kevin Hart), a recently graduated police rookie, now aspires to be a detective like his soon-to-be brother in- law, but James (Ice Cube) still doesn’t think that he has what it takes for the job. He reluctantly takes Ben with him to follow up on a lead in Miami. Plans for a quick trip go awry when their unorthodox policing gets them into a compromising situation that threatens to derail a major case and Ben’s upcoming wedding day. Also starring Ken Jeong, Benjamin Bratt, Olivia Munn and Sherri Shepherd. The dynamic duo of Cube and Hart renew their comedic connection in this bigger, better, and funnier sequel!

Added to wishlistRemoved from wishlist 0
$8.59